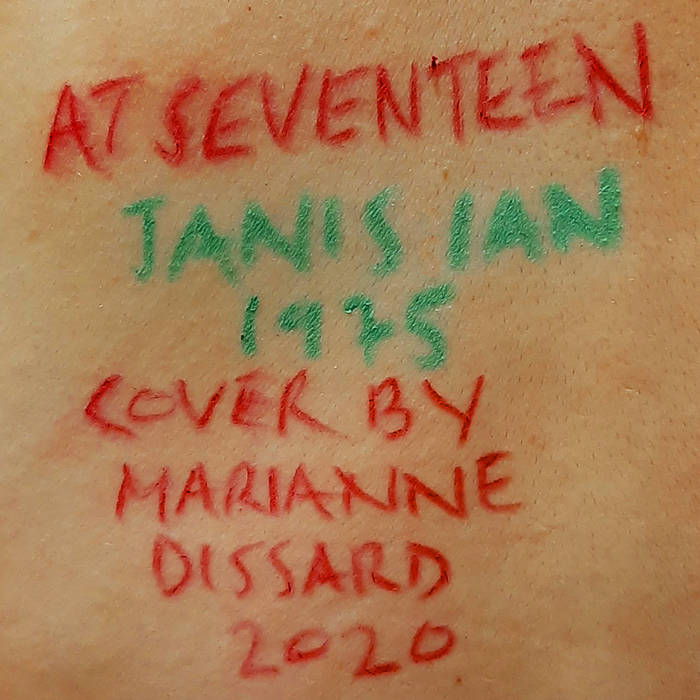 steveinsocal "…cleverly replacing the lilting Bossa-Nova rhythm of the original and refocusing the song squarely on its lyrics with a traditional French chanson-styled vocal interpretation, Marianne's voice helps conveys two versions of the same song… one is world weary, weighed down by a lifetime's torment; the other fresh and irrelevant, pain replaced by wry reminiscences of times gone by…."

reclaimingthecolonies-onestateatatime.blogspot.com/2020/06/marianne-dissard.html
Favorite track: At Seventeen ('Hers').

Dissard and English producer Raphael Mann produced A VERSION EACH ('his', world-weary and 'hers', fresh and irreverent) of Janis Ian's teenage confessional.

The two MUSIC VIDEOS by Mann from an idea by Dissard juxtapose 1950s Technicolor-hued teenage girls with their TikTok-era counterparts in a heartbreaking commentary on the ongoing pressure of being 'seventeen'.

The BONUS TRACK is Dissard's first ever cover recording. This version of folk singer Kath Bloom's 1982 'It's So Hard To Come Home' written with Loren Mazzacane was recorded in 2006 with Joey Burns who after spotting Dissard's husky voice enlisted her for Calexico's 1999 indie hit 'The Ballad of Cable Hogue' and subsequently composed and produced her first album, 'L'entredeux' (2008).

SINGERS of hearth and heart, Ian and Bloom on the East Coast, Dissard in France, the three WOMEN were born roughly a decade apart each (Ian 51, Bloom next, Dissard 69). Kath told Marianne recently: [when 'At Seventeen' came out], "I was really young and had not done more than "sing along" then (75) and I certainly remember Ian's music."

Dissard does not. Raised on Jacques BREL and the more folk-like Georges Brassens, Dissard moved from France to Mesa, AZ at the difficult age of 16, a turn of events which certainly paved the way for a connection to Ian's tale of teenage woos over a new, baffling ALL-AMERICAN background of beauty queens and basketball games. But which teenager, no matter the decade, hasn't "desperately remained at home, inventing lovers on the phone" and which grown-up the world over has not ever been caught "repenting other lives unknown".

Music Videos ('His' and 'Hers') :
By Raphael Mann, from an idea by Marianne Dissard.