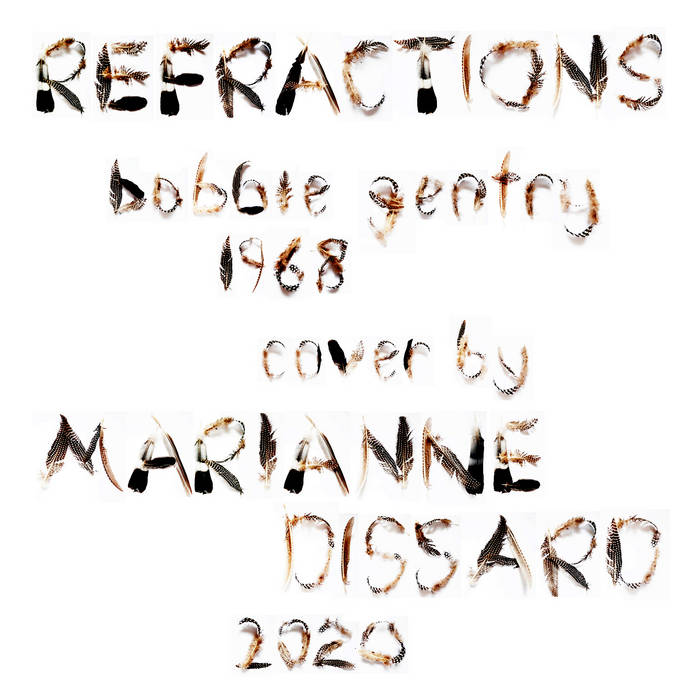 steveinsocal "…dark… Gothic is the first adjective that springs to mind as every element of this song has been deconstructed every element rearranged whole… transported from the Mississippi Delta to a desolate monochromatic coastal town, baroque-pop influences, Cello, violin and clavinet add to the sense of film noir or Hitchcockian soundtrack. Is this a dream or recurring nightmare from which there is no escape..?"

Refractions is the latest in a series of monthly cover singles released since April 2020 by the French-American artist in collaboration with English producer Raphael Mann.

In April, Dissard produced a timely and haunting version of Phil Ochs' 1968 protest song The Scorpion Departs but Never Returns ("stunning cover", per WNYC's John Schaefer for NPR's All Things Considered). Dissard next unveiled two versions ('His' and 'Hers') of Janis Ian's 1975 At Seventeen, which garnered kudos from Ian herself, as well as a gritty version of Steely Dan's 1972 Dirty Work.


Producer Raphael Mann says, "I would describe Bobbie Gentry as one of the very best singers, songwriters & producers (usually uncredited for that part of her work) of her time. She's somebody whose music I have loved for as long as I can remember, and have the highest respect for her. So for me the idea of covering one of her records was daunting, and it seemed to me that the only sane approach was to be daring...to really pull it apart - to dissect it...dismember it...

It's a story about a nightmare, which Bobbie tells fairly straight, as a slightly dazed recollection...and I thought there was a way that we could get deeper inside the dream itself, climb inside the head of the dreamer, so we tried to create that feeling... I also wanted to push both myself and Marianne out of our comfort zones as artists...which seemed to fit the brief for this...we wanted to frighten ourselves a bit... So in lots of small ways we avoided doing the obvious thing or using our accustomed methods, and I think the result shows that..."

"Raphael and I had been sharing producing duties since March, and I was ready to step back and let him fully produce this song, something I'd not let anyone do since Joey Burns put me in front of a microphone for my first album, L'Entredeux. Earlier in the summer, we'd worked on the Janis Ian cover with Mexico City cellist Belén Ruiz and Devotchka's Tom Hagerman, and called on them again for Refractions.

Raphael and I met when I moved to England in 2017 and, aided and abetted by our one neighborhood café/record store, we bonded over a shared love of late 60s/early 70s vinyl records. Choosing to remain in Tucson in March when my touring was cancelled and with Raphael in strict lockdown isolation in Ramsgate, we turned our full attention to these songs, in the process keeping us safe, sane, and connected"

Glass enclosed, exposed wherever I flew
With no control and a crystal soul
That one could see right through.
No ethereal nest where I could rest
I was frightened by what I knew
That my two crystal legs were broken in two.

When I awoke my heart was beating fast
As if all night and endless flight
An eternity had passed.
As I shook my head and slipped from my bed
Released from the prism, at last
I stepped upon a bit of shattered glass.

Produced and arranged by Raphael Mann.